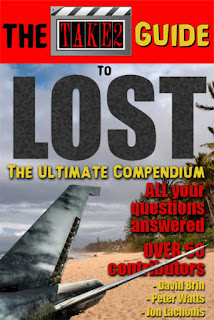 Hello fellow LOSTIES! It's been awhile! I am posting this new entry to bring some pretty awesome news. While life has certainly taken priority over my former avid blogging lifestyle, my older posts seem to keep paying dividends! And that certainly is thanks, in part, to of all of you! Starting today, there is a new LOST Compilation available on all e-reader formats which includes a good portion of my LOST Blog entries from back in the day. It's called the Take 2 Guide to LOST: The Ultimate
Compendium. I'm in good company with many of the other renowned bloggers from LOST's heyday!

If you're watching LOST for the first time, watched awhile ago but want to relive some of LOST's glory days, want to have an archived version of some old web material for posterity, or just give a little nod of appreciation to the writers that kept you entertained for 6 years (and beyond) I encourage you to check it out. And of course, pass the word on to any friends or family that might be interested. The book is $9.99 through the main e-book providers (Amazon, Google, iTunes, Nook, Kobo, etc...).

Sales information for each of these providers can be found here:

The Press Release is included after the jump for additional information about the book. But, first I wanted to thank everyone again for your readership over the years. It's been a fun extracurricular venture and it's nice to see that some of the work has an extended shelf-life! Hope everyone is doing well.

The Take2 Guide to Lost … everything that was Lost and now found.

Announcing the release of the Take 2 Guide to Lost. Over 50 contributors, comprising of established reviewers and academics, award-winning sci-fi authors and lay writers, ask and answer all your questions in this ultimate eBook compendium to one of the most successful TV shows ever.

New York, NY August 12, 2015 - Introducing the Take2 Guide to Lost … a definitive resource of over 400 articles from an incredible community of like Lost-lovers.

Due to its masterful storytelling, suspenseful execution and Rorschachial intonation, Lost generated a tidal wave of online comment never before seen for a television series.

We’ve combed through the nooks and crannies of cyberspace and fashioned some of the best and brightest posts and pieces into this treasure trove of deliberation.

We have gathered and sorted these online articles into a variety of chapters: 'Overture,' with a sampling of posts about the series from various vantage points; 'Cast and Characters,' with entries on all the major characters and some fun bits about the past and future roles of the major actors; 'Mythology,' which includes posts on the Smoke Monster, DHARMA, the Frozen Donkey Wheel, and how religion was reflected on the series; 'Philosophy,' ranging from scholarly but accessible posts on the philosophy and philosophers referenced in the show, to a post on how the series affected one writer's personal philosophy; 'Structure,' including discussions on the flashback/forward/sideways, the DHARMA stations, and a physicist's explanation of the science of time travel; 'Interviews' of the showrunners and writers; and 'Ending,' a largish chapter on the breadth of views about the brilliant and controversial series finale.

All of that is followed by the most substantial chapter of this book, the 'Episode Guide': every episode listed in order, with its essential information, not one but two reviews, interesting tidbits and much more, for each hour of the series, and even coverage of the never-aired Epilogue, 'The New Man in Charge.'

The Take 2 Guide to Lost - The Ultimate Compendium - goes on sale on September 18, 2015. It will be on-sale at Amazon, iBookstore, Google Books, Kobo, Nook and at our own dedicated book store.

There is a sample download of over 400 pages now available. It contains the full first Chapter, a sample of the Cast and Character Guide, the Introduction and the Index for all the other Chapters … and the complete Season 1 of the Episode Guide.

It can be downloaded from

Its books are made up of already-published articles, whether they are found on-line, or from books, magazines and newspapers, paying particular attention to the wonderful writings, their authors and sites, that at the moment are not getting anywhere near the attention they deserve.

All Take2 books must maintain a traditional linear narrative in form, not necessarily of time and place, but of ideas and opinion and be imbued with one overriding primary directive … to add substance to the discourse on the subject.

It is not just a dedicated publisher of books as ‘bits and bytes’, but is also one of the world’s first virtual publishers. Although centered in New York, Take2 Publishing employs editors, copy editors, researchers and more in cities all over the world, including New York, London, Melbourne, Tel-Aviv, Kiev, St Louis, San Diego, Los Angeles … and many more.

All Take2 books are published in all recognized digital formats and are available at all key eBook retail sites including Amazon, Google Books, Kobo, Nook Press and Apple’s iBookstore.

Take2 Publishing also maintains its own online retail store for direct purchases in all formats.

Email ThisBlogThis!Share to TwitterShare to FacebookShare to Pinterest
Labels: Take 2 Guide to LOST

I'll have to check it out. I hope it has the rant between myself and Addict in the comments from the Meet Kevin Johnson episode!!

Nice to hear from you Stedman! I don't think that recap is featured in the book unfortunately but there is a reference to wealth of comments on each post that is featured and there's a link to each blog post as well. So indirectly all commenters are referenced! :)