No, fellow losties, it's no coincidence that this episode was called "LOCK" Down. For as we did see an actual lockdown in the Hatch, we coincidedly saw "LOCKE" go down in several ways. In the physical sense, we saw him trapped under the Blast door, and in the psychological sense we saw him DOWN on himself for having fear of abandonment. Yes, saw a whole new side to John Locke tonight. And we'll get to that in a bit. But let me get the routine comments out of the way first. "WOW!!!!!!!!!!!!!" God, does anyone love this show as much as me? I mean, I think I can find enjoyment in the worst episodes out there! (hello? Fire + Water? I'm talking about you!) But this was far from the worst episodes. It may have been one of the most suspensful and fact revealing episodes to date in Lost. Yes, it may seem like we learned nothing tonight at first glance. But we learned a WHOLE BUNCH! And naturally, with every answered question, we opened up a few more in each of their places. The beauty of the writing strategy behind our favorite show. So, I have tons of goodies (some interesting, some ridiculous) to get into. And I'm sure some of you already researched and found them yourself. So let's just pass the ABC Recap link here and get underway!

"Should I go get a ruler?" Good one Kate! Yes, the testosterone battle between Jack and Sawyer continued, but this time Jack had other things on his mind. And with his best poker face he hustled Sawyer out of the medical supplies. We did start to find out that Jack has been to some crazy locations in his life where he learned how to play poker, and may have gotten his crazy tatoo (which is Matthew Fox's tatoo that we were told would eventually play significance in Lost). Maybe someone can help me out and remind me where exactly Jack said he had been. All I remember is that Sawyer got a "burning sensation" from a visit to the hole of America, Tallahassee.

All storylines tonight seemed to merge together by the end of the episode. That being the Search party of Sayid, Charlie, and Ana Lucia; Jack running into Kate while heading back to the Hatch after this poker game; and the Locke/Henry antics in the hatch during the "LOCKDOWN" I know, this is the stuff that really has our heads spinning and that's why I saved it for the last subject. Let's see if we can make some sense of everything. 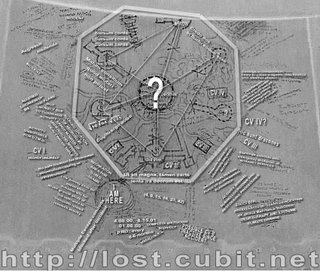 Some helpful Latin Translations from map (Why was everything in LATIN? Who would've written this stuff?):

Aegrescit medendo - The disease worsens with the treatment. The remedy is worse than the disease
Sursum corda - Lift up your hearts (to God)
Credo nos in fluctu eodem esse - I think we're on the same wavelength
Malum consilium quod mutari non potest - It's a bad plan that can't be changed.
Cogito ergo doleo - I think therefore I am depressed
Ut sit magna, tamen certe lenta ira deorum est - The wrath of the gods may be great, but it certainly is slow
Hic sunt dracones - Here be dragons

Okay, I've gone nuts with the details this week and did so much theorizing that probably none of this makes sense. But cut me some slack...this took me a lot of time! lol. We're inching closer and closer to that Season Finale and bringing the conflict with "The Others" to a whole new plateau of significance. And this episode did a fantastic job of continuing to set that stage. Looks like next week will be a new episode again. Not sure if you read the comments on the previous Blog but I noted the Season Finale will be May 24th. Based on this information, we can probably assume we'll have 2 more weeks of reruns between now and the finale. Let's go ahead and guess that they're going to happen April 12th and 19th! We'll know soon enough!

Have a good rest of your day. And please post comments on any theories or facts you've uncovered!

April 12th will definitely be one of the reruns....they were promoting a 2 hour Alias event for that night.

Great recap! I can't wait for next week!

Since you asked, Sawyer learned to play poker in Phuket, Thailand.

P.S. I love how Jack all of a sudden likes Kate again now that Ana Lucia has run off behind his back, and Kate likes Jack again now that Sawyer is a bad guy with guns. That love rectangle will never be resolved...

Oops, I meant JACK learned to play poker in Thailand, not Sawyer.

Thanks both of you!

Also...some of the hatches are outlined in dotted lines. Does this signify that they're contaminated?

CV I, CV II, CV III, CV IV
These may be the power supplies (constant voltage power supply) for the different stations. Did the bunker where the tail plane people were have power? Maybe that station was on CV II, which on the map says "possible CV II inactive since accident".

CV could also stand for containment vessel, or reaction vessel, which is a large steel container that houses the reactor core, control rods, moderator and coolant, and other control systems to maintain safe operation of the reactor.

I wish I knew what the 1985 accident was that's referred to on the map! This island definitely has some fission/fusion experimentation history, hence "heavy water table" on the map.

"PRD every 6-8 months" on the map probably means period ration drop. Was it coincidence that the button had to be pressed at the exact time when nobody could get to the computer? Maybe the ration drop was timed to coincide w/ someone NOT pressing the button, allowing the magnetic field to temporarily go down so the supply plane could fly over without crashing.

Man, I love this show! Releases the nerd in me

wow, that's a crazy amount of detail! Thanks for the insight!

Good point with the PRD and it coinciding with the computer alarm going off. My only question would be then why Desmond wouldn't know that nothing catostrophic would happen if the clock ran out (assuming that he's experienced a PRD before)? You know...since he got all scared and ran from the Hatch when the clock was counting down. Then again, we still don't know what Desmond's true intentions there were. He may have been planted there by Dharma and/or THE OTHERS to establish fear amongst the survivors of NOT pressing the button.

Yeah....definitely love the attention to details on this show! It's fantastic.

here's another good picture of the map (with descriptions on the outside of the picture for the text. thanks brendan!

I'm just watching lost for the 1st time, and I love your blog. This was one of the most exciting episode. Thanks for all the map pictures, that's why I cam here.

@B - Thanks for stopping by and commenting! Appreciate the props on the blog too. Keep reading if you get a chance. The discussions only get crazier. And there are many great episodes to come! Feel free to comment. I never mind discussing the show and am pretty good at not spoiling upcoming events. :)

While binge-watching Lost for the first time on Netflix, I discovered this great blog while googling for an image of the map that appeared in this ep. Glad I found this place because I caught up on all the previous recaps and will be checking in again after every episode.

When Lost first aired, I had two young kids and didn't watch the show at all. I also avoided most of the internet chat, media coverage and enormous hype about the show because I knew, someday, I would get the chance to watch the entire series as a newbie. (I'm also avoiding The Sopranos for the same reasons.) For Lost, that day has finally arrived!

Mike's Lost blog, unlike many others, does a good job of avoiding spoilers for future eps, and any of my comments will do the same because I haven't seen any of the future eps. It also means that any speculation or theories I might postulate here will be same as anyone who commented over seven years ago; utterly unaware of what's about to happen.

I have become a huge fan of the show during the first 40+ episodes and look forward to reliving what you all experienced the first time around!

Hello again Miles! Nice to hear this is how you found the blog. Looks like you're not the only one who was searching for the maps. Funny, an answer that LOST provided in season 6 just came to me as I was rereading one of my questions in the above post. Funny how I never pieced those things together. Obviously, I'm not going to say what it was! lol

Wow...no Sopranos yet either? You have a lot of great TV ahead of you! But, I'm jealous that you're experiencing LOST for the first time now. It gets better with every viewing, but still the initial shock and awe of the episodes was fantastic!

Glad you appreciate my take on spoilers. It is one of the benefits I've seen with this site over the years. Every post was a "point in time" post so there should be few discussions that crossed into future episodes. (I think maybe when the series finale aired I didn't get a post up quick enough and people were commenting on the penultimate post....so I had to put something up while I wrote the recap lol That's when the site was out of hand!)

Glad you're enjoying the blog...I'll catch up with you down the road!