LOST: Season 5 Episode 7 - The Life and Death of Jeremy Bentham

Well, my fellow LOSTIES, there's only one word I can think of to describe the most anticipated episode of Season 5, one we've anticipated ever since we got the name of it back in the fall of 2008. That word would be.......wait for it....... WOW!!!!!! Yeah yeah yeah, I know, I say that about every episode. But, I think you all would be upset if I stopped doing it. So consider it my ongoing trademark! The Life and Death of Jeremy Bentham accomplished exactly what it set out to do. But it didn't stop there! We kinda assumed Locke would hit roadblocks on his off-Island journey. But we didn't know who he might run into, the information that would be divulged on his venture. Oh, and the way they kept the ISLAND as part of the episode was simply fantastic. I must agree that the producers picked the right order for these 2 episodes (316 and The Life and Death of Jeremy Bentham were written simultaneously and supposedly could air in either order). I'm excited to see where this story goes from here. But before we begin speculating, we must recap what we learned in this fabulous episode! Here goes nothing!

When we last left Locke (alive), we saw him turn the crazy "unfrozen" donkey wheel which transported himself off the Island. The last time we saw Locke in the PRESENT DAY (Oceanic 6 timeline) was in a coffin being prepared to board Ajira Flight 316 - Destination ISLAND! Last week, we only saw Jack, Kate and Hurley return to the Island in what appeared to be in the DHARMA Past where they ran into Jin in a DHARMA Jumpsuit. DUM DUM DUMMMMMMM! (Don't worry, we'll get to them at a later date!) How about everyone else? Where/When did THEY end up? Let's dive in and find out!


We are fooled for a minute or two with our new characters Caesar and Ilana. (introduced on Flight 316 briefly last week. Caesar expressed condolences to Jack about his friend's (Locke's) death and Ilana had Sayid in custody) Caesar was looking around someone's office, finding maps of the Island and Guns and Flashlights. But it is not long before we find out that this is after Flight 316 left Los Angeles and we're back in Island territory!

The Life and Death of Jeremy Bentham

Tunisia
We learn that Locke ends up in the same exact location that Ben did a couple years back. Except, Locke traveled 3 years into the future when Ben only traveled about 10 months. From Locke's perspective, it was only really a 4-6 since Ben left. But we're getting ahead of ourselves. Locke shows up laying on the ground and still in much pain from the bone sticking out of his knee! He cries out for help for a long time. Night falls, and finally a pickup truck runs right up to him.

Hotel Westerfield (at an undisclosed time later)
I say undisclosed time because of the information provided in this scene and the size of Jack's beard! We'll discuss in more detail in the bullets.

Back to the Island
(after Flight 316)

Whew, that is one long night and day of blogging folks! But totally worth it. Hopefully, I cleared things up as much as I confused things further! (always my goal!) I hope you enjoyed my ramblings. I think I have tons more questions, but I will save them for the comments!

If discussion on this blog isn't enough to get your LOST fix, I will be also posting the blog at lost.gather.com for a new audience. Feel free to come over and check it out there too!

Hope you enjoyed my ramblings and see you next week! And NAMASTE!

As always, thanks to lost.cubit.net for always providing fantastic screenshots after each episode.

Without further adieu, I present to you my best attempt at recapping what Ms. Hawking was talking about and then getting to the rest of my normal disjointed thoughts! Here we go! 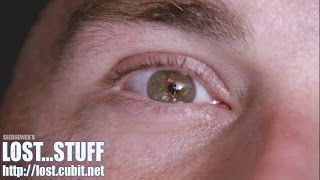 If you didn't watch the "Previously on LOST" prior to starting the episode, you may have thought the sort-of delayed Analog to Digital transition screwed up your cable feed and sent your TV back in time to 2004! Because we opened up on Jack's eye with him lying in the jungle in a suit! Wait a minute, something is different. This is NOT the pilot episode! He's back on the Island! How awesome is that?! Just when you think they're going to abandon character-centric stories forever, it's like we start the show all over again with Jack on the Island. The details to be filled in over this season and possibly next probably in re-energized flashbacks. Geniuses these writers. That's all I can say! After this opening sequence, the entire episode essentially ends up being a Jack-centric flashback to who ends up back on the Island and how they got there. So anyway, Back to Jack! He's in the jungle. He seems disoriented for a second. But then you see a hint of a smile (he did it!). And then in the distance we hear Hurley scream. Jack, like in the pilot, begins to run to go start fixing things (oh how he misses running in the jungle!). Confusion ensues....

You'll have to forgive me if I get too wordy in this section below. But there was a massive brain dump in 15 minutes worth of time. I felt everything was essential information! But I will try my best to put my spin on it! We last left Jack, Sun, Ben and Desmond with Ms. Hawking at the church with a zillion candles. Ms. Hawking informed everyone "We better get started." Well, she immediately takes them down into that crazy science filled basement of hers. Or was it hers after all? "THIS is how they found the Island!!!!!"

The Preparation
After the big brain dumping of information, we now follow Jack putting the plan in motion. Well, really the plan being put in motion FOR Jack as he tries to have a few drinks!

Jack's Apartment (another chance for a drink? naaaa)

Flight 316 takes to the air, and we have some final moments before we return to Paradise Island!

We're Baaaaaaaaack!
We return to the Island and Jack's eye once again, but this time we have the knowledge of how they arrived there. We see Jack with the piece of the suicide note in his hand again, now knowing it was a suicide note (why did the rest of it not come with him?). We watch him dive in the water and save Hurley again, avoid kissing Kate with CPR techniques. And then we hear Kate ask how they got there again.

WOW!!! Okay, I think many of us knew that whoever returned was going to end up in the DHARMA Past. We knew that Faraday was going to be back there because we saw him there in the season premiere. We saw him working for DHARMA which suggested he was there longer than for a brief FLASH. We also knew that he told Charlotte not to come back to the Island. Entertainment Weekly also showed us a picture in their feature of Jack, Hurley and Sun arriving to OTHERSVILE (or the DHARMA Barracks) in a time that seemed like the DHARMA age. I've avoided spoiling that for everyone until now! I was intrigued by the photo, but a little annoyed that I saw it! So this is exciting stuff. We are going to experience the DHARMA days first hand. And apparently our survivors played a role in DHARMA all of this time. Should be interesting to how it all unfolds. But there is still room for plenty of questions!

Whew, I have tons of questions and I'm sure I'll think of more in the comments. I'm sorry if I got too crazy with theories for this episode and for my wordiness in some places. But this episode really got the wheels turning. So much information, and the episode was just a great piece of dramatic television also. Like I said in the beginning. I can't wait to go home and just watch it again and just enjoy it for the GREAT TV it was!

Next week's episode should be equally awesome! The story of Off-Island John Locke. From the previews it looks like he'll be able to walk still. Interesting stuff! Hope you all enjoyed my ramblings and I look forward to reading all of yours! Now, for real this time....NAMASTE and See you next week!

Thanks again to Sledgeweb (lost.cubit.net) who provides excellent pictures on their site that I shamelessly "borrow!"

Hello there Losties! Whew, another crazy episode into the history books. You know, for the past few seasons I had been excited at the thought of a whole episode dedicated to learning about Rousseau's past. After this episode, I'm glad that they kept that storyline to a minimum. We saw the things that we really wanted to see, and that's about it! And naturally, it still raised more questions (or re-emphasized certain questions). The core of this story revolved around Jin and Sun. And it's not the first time that we've had an episode that told their story in 2 different times (see Season 4), but it's the first time we were in the know! Well, I'm all out of wordiness at the moment, so let's skip my over-zealous and over-worded review for today, give the episode another "WOW!!!" and move on to the good stuff!


This episode yet again advances the OFF-ISLAND storyline to get back to the Island. On the Island, we follow Jin's path to meeting up with the other "Left Behinders" and their quest to get to the Orchid. Drama, Death, and Comedy ensues. Let's dive in!

We continue the story as most of the Oceanic 6 (no Hurley) are assembled with Ben. Sun, in her car, has gun in hand and is ready to put an end to Ben for good. The phone rings...

The Island Through the Ages (Many Ages)

We begin our Island story with Jin and Rousseau's crew. But what we witness throughout the episode is much more rapid flashes through time. Things are becoming critical for the "Left Behinders" and it races to an exciting climax by the episode's end.

Locke's Crew and the Well

Locke and crew journey on towards the Orchid and are at some point in the future where the Orchid exists but is run down. 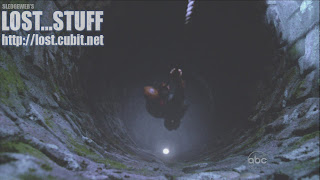 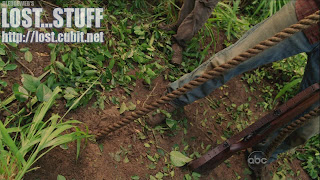 Ben and crew arrive at the church, and Ben is ready to unveil his proof to Sun that Jin is alive.

BOOM LOST!
Crazy episode! No need in speculating what Hawking will tell everyone. Seems like we're going to find out next week! At the end of the episode, we're led to think that these are the people that will go back first. But the previews suggest otherwise. And, I know I complained about the previews giving away too much, I gotta say....next week's episode looks awesome! But I'm not going to get into recapping the preview, we'll wait until next week!

Sorry for the delay with the blog everyone. I was having technical difficulties this morning and you know until people start paying me for this, the day job takes precedence! Hope you enjoyed my ramblings and I look forward to discussing with eveyrone! NAMASTE and see you next week!
Posted by Mike V. at 11:09 PM 96 comments: