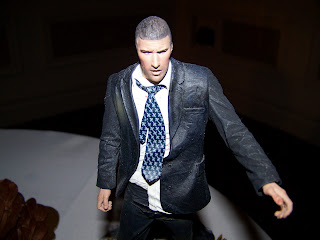 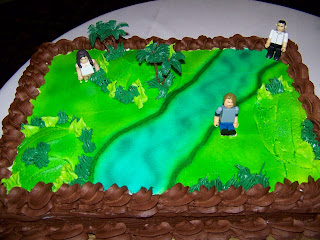 Highlights and speculation from the Clips Above:
So I'm still missing some clips. If anyone finds them, please share them in the comments and I'll add to this post. Hopefully, that helps everyone get their LOST fix for the time being! If not, check the next section!
OTHER NEWS
I think I had more to share, but I just can't think of it right now. Look out for updates to this blog post throughout the next couple weeks if I find more updates. And please, I'd love to hear everyone's thoughts on what was revealed at Comic-Con or if anyone has developed new theories since LOST went on hiatus. I'll post a new blog post if we get any big updates from the producers (Season 6 trailers, Season 6 start date, etc..) As always, I hope you have enjoyed my ramblings and I'll see you probably in a couple months! NAMASTE!
Posted by Mike V. at 10:29 AM

Here's a video of Michael's Hurley audition tape. The audio kind of sucks so if anyone can find a better clip, post a follow-up comment!

Thanks Alex! That's fantastic. I embedded it into the blog post but will keep a look-out for one with some better audio. It's still hysterical!

Hopefully we eventually get an official picture for this. The supposed Final Season POSTER:

The picture was revealed at the beginning of the Comic-Con Panel unveiling one character at a time. The Poster reveals all main characters throughout the 5 seasons minus Nikki and Paolo.

I loved the lost cake.

In temrs of the new storytelling device; i wonder if we might get to see things through the eyes of the whispers since they were a big part of the first season, especailly if we are going to see old characthers. although we still don't know what the whispers are. Or maybe we get to see the thoughts of the smoke moster.

Interesting with the smoke monster or the whispers...that could totally make sense.

I just gotta hope these commercials aren't ACTUAL REALITY now or else things are gonna get pretty messy in terms of understanding the crazy show. Of course, TEAM DARLTON did say to Trust Them....so as I have for 5 seasons, I think I can for just one more!

I like the final season poster. Interesting that they had Locke standing with his back to us.

Here I found most of the clips. I think the only one missing is the memorium one.

Thought it was HUGE when they showed that Kate's stepdad did not die but that some employee of his did. Are they trying to show us that things will have changed ?? Probably just messing with us! LOL

Loved them using Hurley to again be our voice. And Jorge stating how wrong it would be if they just wiped out 5 years of viewing for us. Classic !

Thanks MJ! I think I have most of them on the site...I watched FAN videos but decided that they weren't as pertinent as the actual panel (although pretty darn funny! lol) The in memorium would be cool to see though. I didn't catch that yet.

Yeah, I'm going back and forth with what they were intending to show us with those commercials. I keep going back to them saying "TRUST US" and know they won't steer us in the wrong direction. But major kudos to them for putting the fear of the unknown into us all! lol

Vote for LOST on Sports Guy's TV show of the decade! http://tinyurl.com/mn5scr

Has anyone watched the ABC LOST webisodes about the Dharma Initiative? VERY interesting stuff!!!
Watch them here: ABC DI Vids

Weasel, I mentioned them in the blog post, but I only saw the first video. Have they posted a new one yet?

I'll have to check out the 2nd episode when I get a chance! Thanks for the reminder! :-)

Here is the schedule

Thanks Weasel! I still haven't watched but made a note to watch tonight!

Hey Mike, congrats on the wedding in 2009! It was great seeing your Lost wedding cake!

In your blog you wrote for season 6: "Perhaps the flashes will be to an alternate timeline with things that COULD HAVE BEEN had time been changed?" So you are already partially on board with my "It's a Wonderful Life" theory on season 6! And apparently the TV commercials for season 6 divulged that they would reset the timeline after all, so I sure hope we are right about showing "what could have been" instead of wiping out 5 seasons of the show.

Since I have season 6 all cued up on Netflix and I'm chomping at the bit, so I don't have the patience to watch all of the Comic-Con videos, but maybe I'll come back and watch them some day, because they sound like a lot of fun! (I did watch the TV commercial for Mr. Cluck's chicken, LOL!) I also haven't checked out the multitude of Lost extras that are floating around, key among them being stuff issued with the DVD sets. I'm just going straight with the actual TV episodes and presuming nothing critical is being left out (which I'm sure is the case).

But it is nice reading this blog post and hearing that certain things were confirmed or denied by the producers. I can't wait to get started on season 6, though I am a little nervous about seeing the first five minutes!

lol thanks Miles. That was the "Groom's Cake"...we had a traditional wedding cake. :-)

And you're 4 eps into season 6 already, so I gotta catch up to your comments!

It was awesome to watch these panels before going on to season 6. A week or two ago I found a panel from like mid-season 3 I think, and that was cool to watch too. I finished season 5 two days ago and I'm just waiting a bit before I start 6. I couldn't imagine watching it as fast as Miles did haha.

Given the title of the season 6 premiere episode, I'm not sure about my whole theory that I posted on The Variable blog haha, if you saw that. I trust the writers though, so I'm excited for whatever they had planned for the last season.

Sorry Super J! I saw you posted but I've been swamped at work! I'll have to go back and check your theory. But I'll let you watch for yourself to figure out if you were right or not. :)

Definitely trust the writers and keep an open mind! People went into that final season expecting every answer to every nook and cranny of a question they came up with in each episode that were never intended to be questions. The major questions are answered and I thought they did it well. I won't spoil here though! Enjoy the ride!